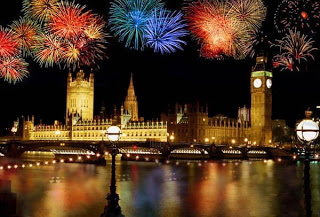 BONFIRE NIGHT
On the 5th of November

Bonfire Night, or Guy Fawkes’ Night, is celebrated on November 5th with large public firework displays and bonfires. It commemorates the failed attempt of Guy Fawkes to assassinate King James of England in 1604. Guy Fawkes tried to hide gunpowder under the Houses of Parliament and blow up the King as he opened a new parliament session. Fortunately (for the King), his plot was discovered and Guy Fawkes was executed along with his fellow conspirators. It is traditional to burn an effigy of Guy Fawkes on the bonfire.  Actually, there has long been a pagan rite associated with this time of year, the beginning of winter. People would destroy unwanted and possibly infectious items, including animal carcasses - hence, bone fire/bonfire – before the difficult winter.
Publicado por Ester en 0:35